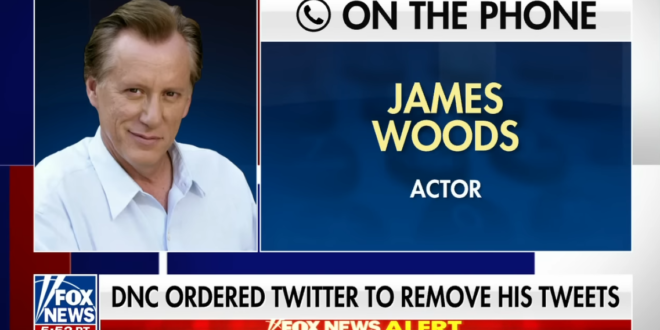 Actor and outspoken conservative James Woods is promising a lawsuit against the DNC following revelations from Elon Musk about Twitter’s handling of the Hunter Biden laptop story. Matt Taibbi shared one internal communication that included a James wood tweet apparently sent to the company “from the DNC.”

“Celebrities and unknowns alike could be removed or reviewed at the behest of a political party,” Taibbi tweeted.

“Whether I win or lose, I am going to stand up for the rights that every American – not a so-called celebrity. I’m not a celebrity — I’m hardly recognizable anymore because my career has been destroyed by these very people,” Woods said.

It’s not clear which tweets the DNC supposedly had a problem with, but for years Woods has promoted the most extreme crackpots on Twitter.

In 2017 he posted a homophobic attack on Anderson Cooper and predicted a civil war if Trump were to be removed from office.

Trump himself took up Woods’ cause on Twitter after Woods was suspended for a “hang them all” tweet.

Woods claimed to Tucker Carlson last night that Hollywood casting agents are blacklisting other actors merely for following him on Twitter.

As for his “destroyed” acting career, Wikipedia shows his most recent film appearance to be 2016’s animated flop “Bling,” in which he voiced a “robot henchman.”

Thank you, @elonmusk, for giving back to all Americans, and voices around the world, the most precious of gifts – free and open speech.

I admire you and I salute you, sir.

Previous Netherlands Team Eliminates USA From World Cup
Next Trump: We Must Now “Terminate The Constitution”