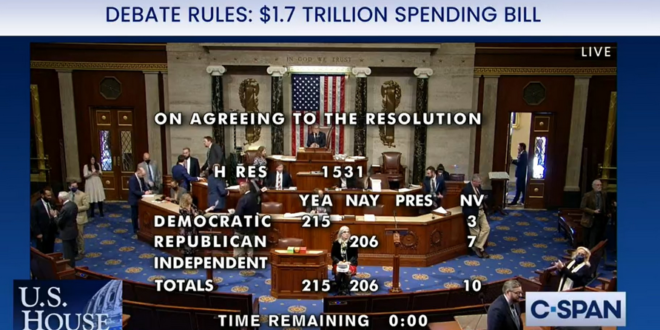 The House voted Friday to pass a massive $1.7 trillion spending bill that would fund critical government operations across federal agencies and provide emergency aid for Ukraine and natural disaster relief. The bill will next go to President Joe Biden to be signed into law.

Government funding is currently set to expire late Friday evening – and lawmakers raced the clock to clear the measure before the deadline. The massive spending bill for fiscal year 2023, known on Capitol Hill as an omnibus, provides $772.5 billion for non-defense, domestic programs and $858 billion in defense funding.

BREAKING: House passes a $1.7 trillion spending bill with Ukraine aid that avoids a partial government shutdown. The measure goes to President Biden to be signed into law. https://t.co/jkZiZZsQ6p

#BREAKING: Rep. @chiproytx slams the omnibus spending bill on the House floor: “What you see here on the floor of the House of Representatives should make everybody ashamed!” pic.twitter.com/opaHN2XwQW

Just walked off of the House floor after voting against the $1.7 trillion spending bill. This process shows us that Washington is broken.

I will always fight for Montanans in Congress. pic.twitter.com/aMvGaloYav