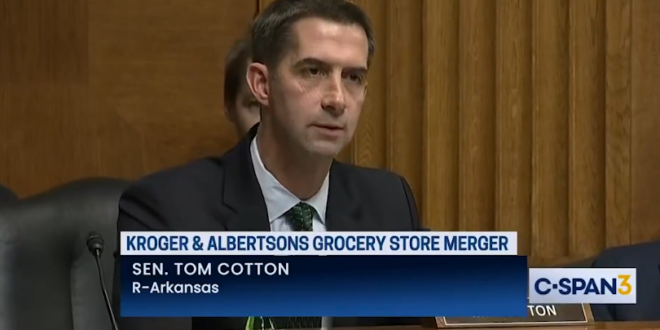 Senator Tom Cotton (R-Ark.) cautioned Kroger against expecting “Republican senators to carry the water for them” while pursuing corporate policies that promote abortion and the LGBT agenda at the expense of families and people of faith.

In response to the possibility of painful regulatory hurdles, Cotton had only one response for Kroger, “I’m sorry that’s happening to you. Best of luck.” Kroger has embraced woke corporate policies like a Texan does his cowboy boots.

After the Dobbs decision in June, a Kroger spokesperson announced the company’s health care policy would cover “travel benefits up to $4,000” for employees traveling out of state to obtain an abortion. In September, the Kroger-owned Fred Meyer grocery chain sponsored (as did Albertsons) a Pride festival in Boise.

Cotton’s response was met with approval among a range of conservative commentators, including The Federalist’s Christopher Bedford and former Trump advisor Stephen Miller. They agreed that Cotton’s tone and message was “exactly right.”

For their part, Democrats are skeptical about the merger on antitrust grounds. The proposed Kroger-Albertsons merger would create the nation’s second-largest grocery chain, closely behind Walmart.

“I’m sorry that’s happening to you. Best of luck.”