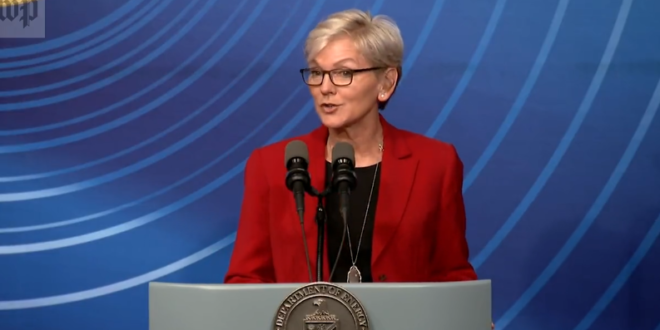 The U.S. Department of Energy announced a breakthrough in nuclear fusion on Tuesday that puts the world one step closer to harnessing an abundant energy source free from carbon emissions and long-lived radioactive waste.

U.S. Energy Secretary Jennifer Granholm confirmed that scientists achieved a reaction that created more energy than was used — known as a net energy gain — at the federally-funded Lawrence Livermore National Laboratory in California.

“Last week at the Lawrence Livermore National Laboratory in California, scientists at the National Ignition Facility achieved fusion ignition,” Sec. Granholm said. “It’s the first time it’s ever been done. … Simply put, this is one of the most impressive scientific feats of the 21st century.”

Nuclear fission produces a lot of radioactive waste, which can be dangerous and must be stored safely – potentially for hundreds of years. The waste produced by nuclear fusion is less radioactive and decays much more quickly.

Most fusion experiments use hydrogen, which can be extracted cheaply from seawater and lithium, meaning fuel supplies could last for millions of years. It has been described as the “holy grail” of energy production.

On Dec. 5, 2022, a team at LLNL’s @lasers_llnl conducted the first controlled fusion experiment in history to achieve fusion ignition. Also known as scientific energy breakeven, the experiment produced more energy from fusion than the laser energy used to drive it. pic.twitter.com/t9htICEcuh

The achievement is a major scientific breakthrough that was decades in the making, and will provide unprecedented capability to support @NNSANews‘ Stockpile Stewardship Program & provide invaluable insights into the prospects of clean energy. Learn more: https://t.co/ree9UAJSkf

Federal scientists announced that they created the first-ever nuclear fusion reaction that generated more energy than it took to produce.

Energy Secretary Jennifer Granholm called the breakthrough “one of the most impressive scientific feats.” https://t.co/jSICEunNI7 pic.twitter.com/1S7asYAsDS