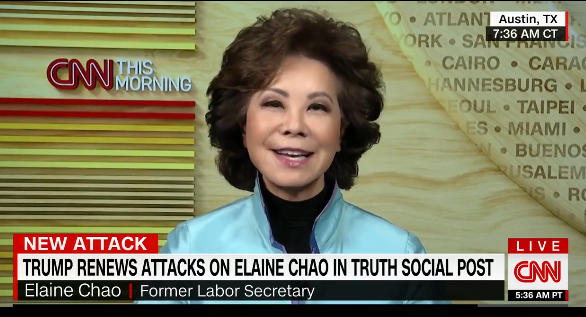 Former U.S. Transportation Secretary Elaine Chao and her husband, Senate Minority Leader Mitch McConnell, generally have stayed mum when former President Donald Trump slams them online, but on Thursday she responded after her ex-boss repeated a racist nickname he has used for her before.

When asked about it during a televised interview with CNN, Chao called it a “racist taunt” and said he’s “trying to get a rise out of us.” “He says all sorts of outrageous things, and I don’t make a point of answering any one of them,” said Chao, who was on CNN talking about Southwest Airlines’ cancellations of flights this week.

Chao told CNN that if Trump were using the N-word or other racist slurs, the media would not repeat them, but they have repeated the anti-Asian slurs he has called her.