A federal grand jury in the Southern District of Texas returned an indictment that was unsealed yesterday charging eight men with conspiracy to commit securities fraud for a long-running, social media-based “pump and dump” scheme.

The defendants used their extensive social media presence on Twitter and Discord to hype interest in particular securities by posting false and misleading information in order to “pump” the prices of those securities, while concealing their intent to later “dump” their shares by selling them at the artificially inflated prices.

From in or around January 2020 to in or around April 2022, the defendants profited at least approximately $114 million from their scheme.

According to the indictment, the defendants collectively had over 1.5 million followers on Twitter to whom they allegedly disseminated false and misleading information about the securities that they pumped and dumped as part of the charged scheme.

The defendants also allegedly used Atlas Trading Discord to disseminate false and misleading information about securities that they pumped and dumped as part of the charged scheme.

As further alleged in the indictment, the defendants used their social media credibility to maximize their own profits at the expense of their followers, holding themselves out as skilled stock traders by posting pictures showcasing their profits and extravagant lifestyles, and encouraging people to follow them on social media in order to share in their financial gains.

Most the of the Twitter handles listed below by the DOJ are still active and some have tweeted today.

I love my homies on here. The rest of you can keep swinging on my nuts.

WELCOME TO THE GOBLIN GANG!! A new WEEKLY series showing you what it’s like to be a MULTI MILLIONAIRE day trader. EPISODE 1 launches NEXT THURSDAY! Subscribe NOW and don’t miss it! ALL the HIGHS, LOWS, and the TRUTH! Never before shown! SUB NOW #gg https://t.co/pFZXCHQvbU pic.twitter.com/FOCXG9LFAd

I don’t and I won’t acknowledge anyone’s pronouns, just saying. I also don’t care where you hide the pipe. Not my business.

Went from USA to Thailand to Japan to USA for a day then to Israel for a week. Got home last night and slept for 12 hours. Ready to hit the week running. I hope you all had an amazing weekend. Let’s get it!

Thinking about becoming an antivaxxer but was already vaxxed

Are there any devout antivaxxers that can help me please 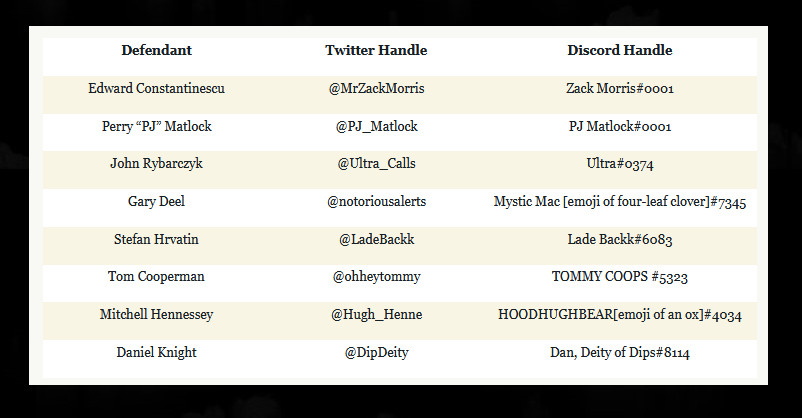