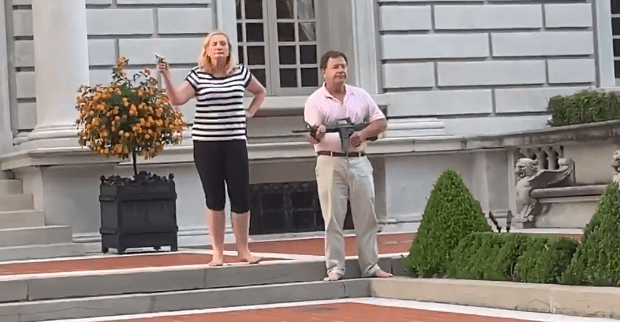 Court: Mark McCloskey Can’t Have Guns Or Money Back

Mark McCloskey, a lawyer who was pardoned alongside his wife for pointing guns at racial justice protesters outside their Central West End mansion in 2020, won’t be getting his guns or money back, a St. Louis judge ruled Wednesday.

McCloskey filed suit last year seeking the return of a Colt AR-15 rifle and a Bryco .380-caliber pistol that he and his wife, Patricia McCloskey, agreed to surrender when they pleaded guilty to misdemeanor charges stemming from the confrontation with protesters on Portland Place.

The McCloskeys drew public attention when they emerged from their home and waved guns as people protesting the killing of George Floyd by Minneapolis police officer walked by.

Read the full article. Mark McCloskey ran for the US Senate this year, finishing fifth in the Republican primary with 3% of the vote. The following month both McCloskeys lost an appeal to the US Supreme Court to reinstate their law licenses.