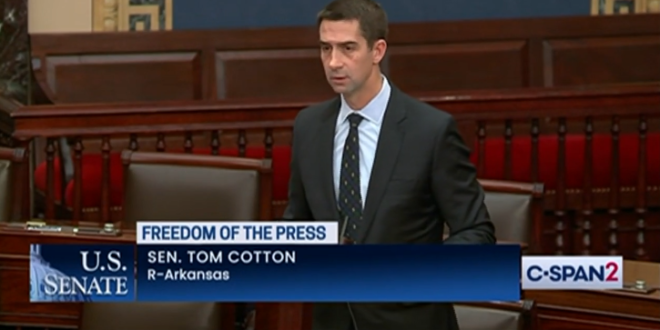 The Protect Reporters from Exploitative State Spying Act or PRESS Act was introduced in the U.S. House of Representatives by Rep. Jamie Raskin of Maryland on July 1, 2021.

The bill was passed in the House over a year later on September 19, 2022, and was being considered and debated in the U.S. Senate before Cotton blocked it on Wednesday afternoon.

According to Congress’ website, the PRESS Act “prohibits the federal government from compelling journalists and providers of telecommunications services (e.g., phone and internet companies) to disclose certain protected information, except in limited circumstances such as to prevent terrorism or imminent violence.”

Cotton (R-Ark.) objected, claiming that “the PRESS Act would immunize journalists and leakers alike from scrutiny and consequences for their actions.”

“This bill would prohibit the government from compelling any individual who calls himself a ‘journalist,'” Cotton continued, indicating scare quotes with his hands, “from disclosing the source or substance of such damaging leaks.”

Wyden pushed back against Cotton’s claims, pointing to the exceptions in the law that were adequate enough to satisfy all Republicans in the House, which advanced the bill by a voice vote in September.

My bipartisan PRESS Act was just BLOCKED on the Senate floor.

This bill is a no-brainer to protect free press in America, but I’m not giving up. I’m going to keep fighting until we get this across the finish line. https://t.co/PWFzreQL92

Sen. Tom Cotton (R-AR) objects to the PRESS Act, which would protect journalists from having to disclose their sources or information they obtained while reporting:

“It would treat the press as a special caste of crusaders for truth.” pic.twitter.com/u3BCxUdxbd

journalism is bad except when i get to do literal authoritarianism in the op-ed pages pic.twitter.com/0tfWYFUKA2

The PRESS Act would shield journalists and leakers from consequences—even when their actions endanger American lives and security. pic.twitter.com/de0d3GrYcy