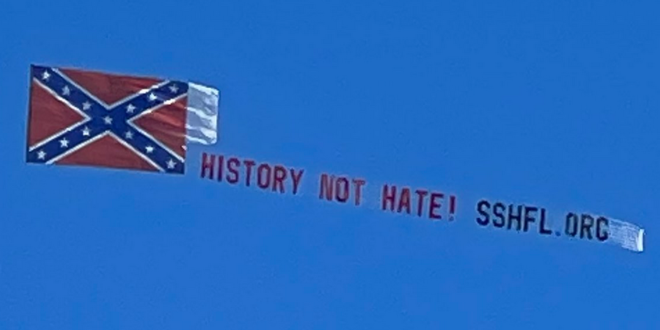 A neo-Confederate organization once again flew a flag over the Jacksonville Jaguars stadium during a Saturday home game. Save Southern Heritage announced a small plane would take flight over TIAA Bank Field during kickoff for a home game against the Dallas Cowboys.

The plane flew a banner with the words “History Not Hate,” a common motto asserting the Confederate battle flag as a symbol of history and not one of racism. The banner also had a website address for the organization.

This marks the third time this year the group has flown the flag over the stadium during an NFL game. The act has drawn bipartisan rebuke in the past.

Save Southern Heritage flies the Confederate Battle Flag (again) over @TIAABankField and downtown Jacksonville prior to today’s NFL game between the @Jaguars and Dallas Cowboys. Photo: @wwbrown19 of @JAXTDY pic.twitter.com/3zmzol51MC

I’ve given the Jax City Council a budget that includes the needed funds to remove the monuments. Obviously, I think they should. They have decided to ignore the issue, Each member should take a position. Yes or No on monument removal. Take a vote. Do your job on tough issues.