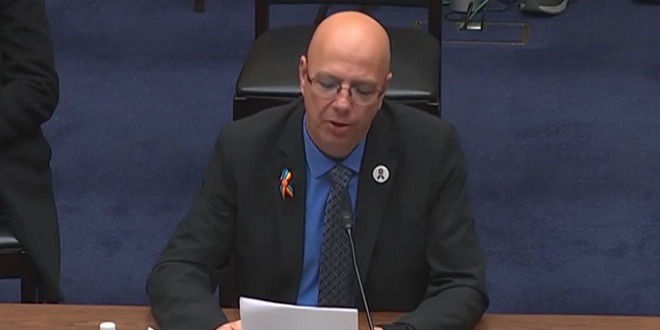 “We are being slaughtered and dehumanized across this country, in communities you took oaths to protect,” said Matthew Haynes, owner of the Club Q nightclub in Colorado Springs, Colorado, where five people were killed and 22 wounded in a mass shooting last month.

James Slaugh barely lifted his right arm when he swore to tell the truth Wednesday morning. He’d been shot in the Club Q attack, and his left hand helped prop up his right as he prepared to testify about the anti-LGBT rhetoric that had proliferated before the shooting.

“Club Q was a second home and safe space. Not just for me, but for all us,” Slaugh, who wore a rainbow tie and Club Q button, told a largely empty congressional committee room in Washington, D.C. “Outside of these spaces, we are continually being dehumanized, marginalized and targeted.”

He recounted how his mother had learned to accept his sexuality, how the shooting was his worst nightmare and how he believed that growing anti-LGBT rhetoric had fueled it.

Sitting behind an imposing oak desk, facing members of the House Oversight and Reform Committee, 25-year-old Michael Anderson recalled working behind the bar at Club Q when he heard the sound of gunfire.

“I can still hear the rapid firing of bullets today,” he said. “It’s a sound I may never forget. It’s a sound I hope no one here or anywhere else in this country has to hear.”

Anderson did not hold back his frustration or anger. “To the politicians and activists who accuse LGBTQ people of grooming children and being abusers, shame on you,” he said.

Michael Anderson was bartending at Club Q when a gunman opened fire at the LGBTQ+ club. Anderson urged Congress to reinstate an assault weapons ban. “What needs to be done is placing the lives of children and adults above our unhealthy obsession with assault rifles,” he said. pic.twitter.com/l0qUXGrLe3

Club Q Nightclub Shooting Survivor Michael Anderson opening statement: “The time to do something is now. What needs to be done is placing the lives of children and adults above our unhealthy obsession with assault rifles.” pic.twitter.com/p2cH8IsjKz

Club Q Nightclub Shooting Survivor James Slaugh: “Club Q was a second home and safe space not just for me but for all of us. Outside of these spaces we are continually being dehumanized, marginalized, and targeted.” pic.twitter.com/gsaYE0Agtw

“I woke up to the wonderful news that five mentally unstable fa**ots and lesbians and 18 injured. The only thing I’m mad about is that the fa**ots had courage to subdue the wonderful killer.” pic.twitter.com/PUNC7OVQ4H