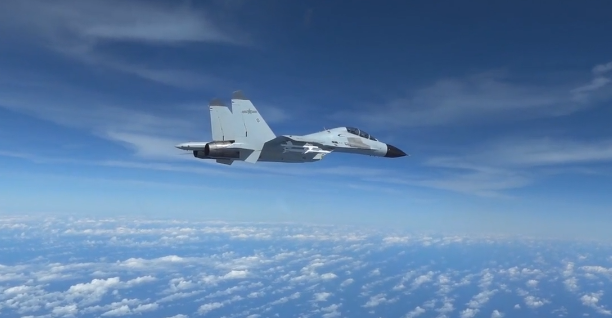 The PLAN pilot flew an unsafe maneuver by flying in front of and within 20 feet of the nose of the RC-135, forcing the RC-135 to take evasive maneuvers to avoid a collision.

The U.S. Indo-Pacific Joint Force is dedicated to a free and open Indo-Pacific region and will continue to fly, sail and operate at sea and in international airspace with due regard for the safety of all vessels and aircraft under international law.

We expect all countries in the Indo-Pacific region to use international airspace safely and in accordance with international law.

Video released by the Pentagon on Thursday appears to show the Chinese fighter closely approaching the American jet on its left, before briefly cutting in front of the RC-135 and veering back away to the left. The video appears to be shot from inside the RC-135.

The incident is the latest in a series of tense encounters between the U.S. and Chinese militaries in and around the South China Sea, parts of which China claims as its own.

The Pentagon has warned such close encounters can lead to accidents or miscalculations. Defense Secretary Lloyd Austin in June called recent increases in such unsafe interactions between Chinese and U.S. aircraft and Naval vessels “alarming.”

NEW: The U.S. military says a Chinese fighter jet came within 20 feet of a U.S. Air Force aircraft in international airspace over the South China Sea last week, forcing it to make evasive maneuvers to avoid a collision.pic.twitter.com/1IbNH4ZOyW