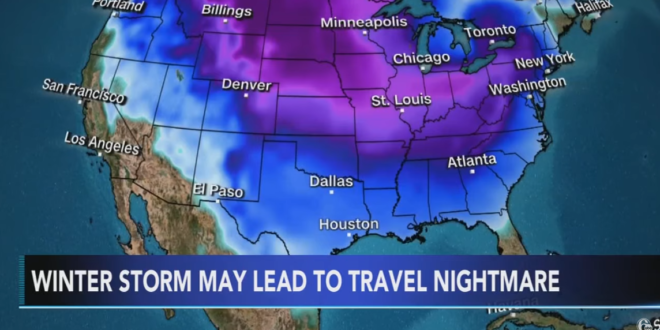 Meteorologists warn an expansive snowstorm is set to unfold across parts of the center of the country before the end of the week and jeopardize holiday travel plans ahead of the Christmas weekend.

The timing of this cross-country winter storm could not be worse, as millions rush to finish their shopping or embark on their holiday travels. Ahead of the storm’s arrival, winter storm watches were issued across almost a dozen states in the Plains and Midwest.

By Wednesday morning, the watches were upgraded to winter storm warnings in Kansas City, St. Louis and Minneapolis, with blizzard warnings just to the west of the Twin Cities.

Cities throughout the country are opening warming centers this week, including Chicago, Houston, San Antonio, Atlanta and Albuquerque, New Mexico. Denver could see its coldest day in 32 years, and officials are advising residents to avoid being outside for extended periods.

In Houston, which experienced a deep freeze in 2021 that knocked out power for millions of residents, officials said they hoped this year would not be a repeat. The severe weather this week could pose a threat not just to humans, but also to outdoor animals and livestock, officials have warned.

The watches and warnings, which stretch from the U.S.-Canada border all the way down to the Texas Gulf Coast, come as forecasters are expecting wind chill values to possibly drop as low as minus 70 degrees in areas of the central High Plains.

“Cold of this magnitude could lead to frostbite on exposed skin within minutes, as well as hypothermia and death if exposure is prolonged,” the National Weather Service said in a Wednesday morning advisory, calling the blast of bitter cold air the “most widespread weather hazard” facing the nation over the next few days.

“Widespread wind chills below zero are forecast to extend as far south as Texas and parts of the Deep South through the end of the week, as well as near the major cities across the Northeast,” it added.

Major airlines have issued travel waivers ahead of the winter storm that’s forecast to rock cities including Chicago — a key air travel hub — the hardest. United Airlines, which is headquartered in the Windy City, is offering inclement weather waivers to travelers in the Midwest, Texas, and on the East Coast.

Flight change fees will be waived as well as fare increases for customers who change flights due to the forecast within a specific rebooking window. JetBlue, American Airlines, Delta, Southwest, and Alaska Airlines are also offering waivers for a number of specific flight paths and dates.