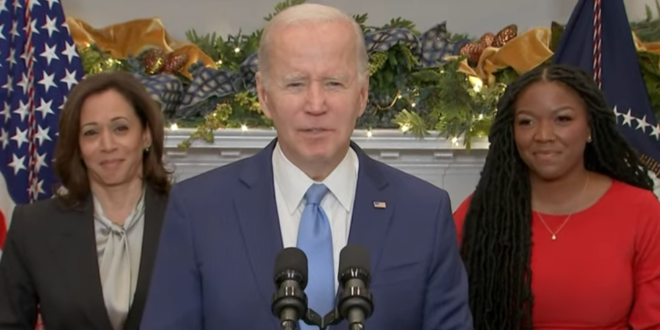 Speaking at the White House, Joe Biden formally announced the release of Brittney Griner from detention in Russia, and pledged to continue working to bring home another American jailed in the country. “Moments ago, standing together with her wife Cherelle in the Oval Office, I spoke with Brittney Griner,” Biden said.

“She’s safe, she’s on a plane, she’s on her way home after months of being unjustly detained in Russia, held under intolerable circumstances. Brittney will soon be back in the arms of her loved ones, and she should have been there all along.”

He thanked officials in his administration who worked for her released, as well as the United Arab Emirates, “because that’s where she landed.” The president noted that “the past few months have been hell” for Griner, and her family and teammates.

Biden and Vice President Kamala Harris spoke by phone with Brittney Griner from the Oval Office, a U.S. official said, adding that the call included Griner’s wife, Cherelle. The White House released a photo of the telephone call https://t.co/9WZZO03XFj pic.twitter.com/23j3x8a6GS

Cherelle Griner talks about the release by Russia of her wife, WNBA basketball star Brittney Griner, during an appearance with President Joe Biden in the Roosevelt Room at the White House in Washington. Photo by Jonathan Ernst pic.twitter.com/f3AUHWhe7n

Moments ago I spoke to Brittney Griner.