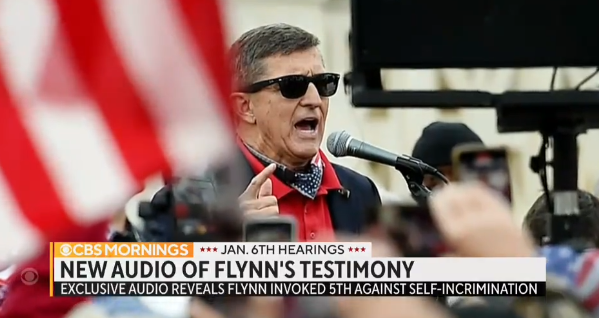 CBS obtained audio from the former Trump national security advisor’s deposition to the January 6th Committee as part of their investigation into the storming of the U.S. Capitol.

During his testimony, Flynn faced numerous questions about his efforts to block the certification of President Joe Biden’s election, plus his reported attempts to get defense and intelligence figures to assist him in this.

Flynn repeatedly invoked his Fifth Amendment right — but the investigator’s questions focus on the depth of the effort to undermine U.S. democracy in 2020. pic.twitter.com/Wj3CuMprEA

Listen: Michael Flynn Takes the 5th During Grilling On His Asking Defense Officials to Help ‘Take Over’ and ‘Redo’ the 2020 Election https://t.co/TGyGKZr3FX