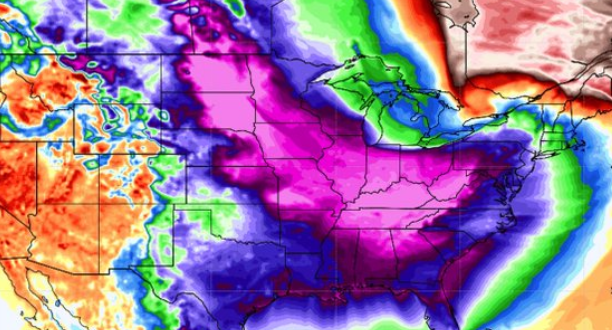 Key US airlines have issued travel waivers ahead of what’s forecast to be a brutal “bomb cyclone” of wintry weather in the Midwest and other regions later this week. The important aviation hub of Chicago is forecast to be one of the cities hit the hardest, with the National Weather Service warning of the potential for a blizzard.

By Tuesday morning, United Airlines, headquartered in Chicago, was offering four separate winter weather waivers: One in the Midwest, one for Texas, one for the East Coast and another for Central and Northwest US. Other major US carriers, including American and Southwest, had also issued a variety of waivers.

The developing cyclone will deliver heavy snow and blizzard conditions to some and downpours to others between Wednesday and Friday night, all coming at a time of year when more than 110 million Americans are expected to take to the roads and air.

The potential exists for serious travel disruptions at major airport hubs in the Midwest and Great Lakes, including Chicago’s O’Hare International, where heavy snow and howling winds are expected — with the worst conditions Thursday into Friday.

Travel could “become extremely dangerous and life-threatening, particularly in light of the bitterly cold temperatures during the height of the storm,” wrote the National Weather Service office serving Chicago.

Meteorologists in the Twin Cities forecasted wind chills as cold as minus 40 F Thursday through Friday. Even locations as far south as Orlando, Florida, could potentially see below-freezing conditions this week, according to AccuWeather meteorologist Alex DaSilva.

Temperatures could drop up to 30 degrees below normal for the center of the country from the Gulf Coast up to the Northeast, DaSilva said.

Heavy snowfall and wind gusts may cause near-zero visibility and drifting of snow, leading to dangerous and at times impossible air and land travel ahead of the holiday weekend, according to the National Weather Service.

From Minneapolis to Chicago to Buffalo — this blizzard/Arctic outbreak is looking like an exceptional, dangerous event due to combo of snow, wind & cold. @NWSTwinCities: “a high end, life-threatening event.”@NWSBuffalo: “a once in a generation” storm.https://t.co/XyA6RknvhN

Several major U.S. carriers, including American, United and Southwest, have issued a variety of weather-related waivers ahead of a massive storm later this week: https://t.co/9HlqR8TZF8

I shut down this bomb cyclone, in the name of Jesus+ https://t.co/ToEVcSmbtU