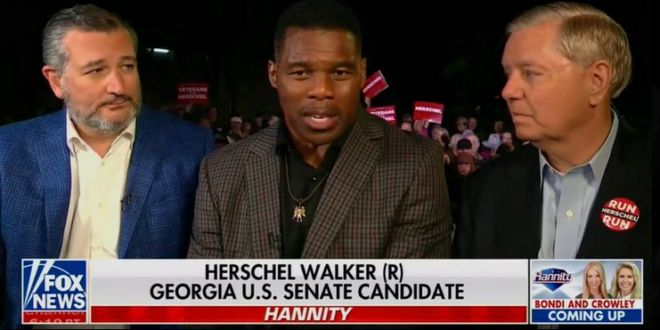 Walker: “This Erection Is About The People” [VIDEO]

With his Georgia Senate race hanging in the balance, Republican candidate Herschel Walker had an unfortunate slip of the tongue as he tried to drum up support for his campaign Tuesday night. Flanked by Sens. Ted Cruz (R-TX) and Lindsey Graham (R-SC), Walker spoke on Fox News about the significance of his election. “This election is about more than Herschel Walker,” he said. “This erection is about the people.”

Read the full article. #Erection is trending on Twitter.

Who else thinks it’s hilarious that both Ted Cruz and Lindsey Graham nod their heads in agreement when Herschel Walker says “this erection is about the people.”
pic.twitter.com/UwAUcE0CWA