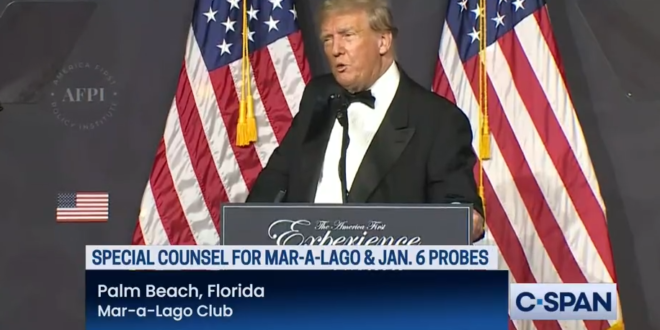 “We’re a third-world country in our elections, and our borders are wide open with unknown people, many of them many, many millions, millions and millions.

“We have no idea who these people are and where they came from. And they’re terrorists and they’re criminals and they’re murderers and rapists, and they’re pouring into our country totally unimpeded.

“We have massive inflation, rampant crime. You can’t even walk down the streets in Chicago, New York, Los Angeles and every other Democrat run city without getting mugged, shot or killed.” – World famous lying criminal, last night.

listen to this rant while reminding yourself that Trump is speaking at a gala. completely surreal. pic.twitter.com/nOGVScpo6L

Trump: “Why aren’t they investigating all of the other presidents that preceded me?” pic.twitter.com/Pi8JqJ9lJw

Trump calls for the feds to “invade” the homes of the Clintons and Bushes pic.twitter.com/rOSnMGfmdw

“I’ve proven to be one of the most innocent people ever in our country” — LOL pic.twitter.com/Js4CSRcdpY

“We’ll take this opportunity to move on with our program schedule” — C-SPAN bails from live coverage while Trump rants about Chicago and Afghanistan pic.twitter.com/vxqVMiQkxZ