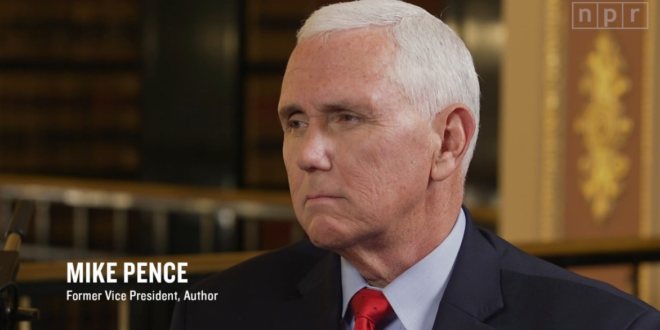 Pence: Reckless Trump Endangered Me And My Family

The former vice president met an NPR team at the law library of the Indiana state capitol: a fitting spot, both because he once served as the state’s governor and because upholding the law is now at the center of the story he has to tell. For part of the 42-minute conversation, Pence recounted the events of Jan. 6, 2021, when he presided over the ceremonial counting of electoral votes from the 2020 presidential election.

When a mob disrupted the proceedings, Pence retreated with family members to an office within the U.S. Capitol, but refused to flee the building. “It just infuriated me,” he said. Eventually he learned that many members of the mob, egged on by a tweet from the president, had chanted to hang him. “President Trump was wrong, and his words and actions that day were reckless,” Pence said. “They endangered my family and people at the Capitol building. And I’ll never hold any other view.”