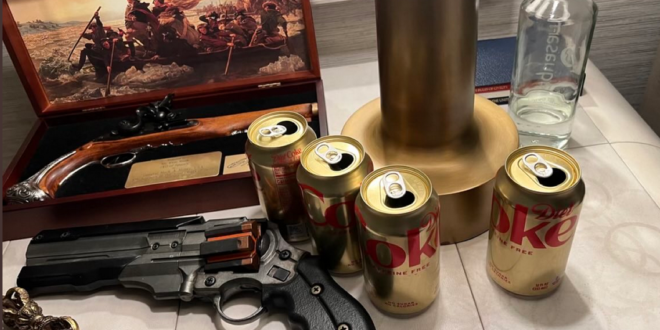 Twitter CEO Elon Musk posted a photo of his “bedside table” on Monday featuring a few odd decorations – including a pair of non-firing guns, a Buddhist amulet and a multiple cans of Diet Coke. The billionaire’s photo included a non-firing replica of George Washington’s flintlock pistol, lying in a wooden box whose open lid displayed an image of Emanuel Leutze’s painting of first US president crossing the Delaware River. Lying in front of it was a model replica of a .357 revolver from the “Diamond Back” video game. Next to the guns lays what appears to be a Tibetan Buddhist amulet known as a Vajra Dorje, used for meditation.

There is no excuse for my lack of coasters

My daughter was killed because of gun violence. Every day across America children are killed because of irresponsible adults who do not lock up guns. Seriously,
WTF is wrong with you? Is there a mental health concern? Are you now just using your $44B to incite violence? pic.twitter.com/It6B0K8pSR

It is disturbing to see @elonmusk using his platform to model irresponsible firearm practices.

8 kids a day are unintentionally injured or killed with an improperly stored firearm.

As a parent, you should focus on sharing safe firearm storage methods. cc: @endfamilyfire https://t.co/T1xvCw5AoA

As a survivor and now Trauma Surgeon, I can tell you @elonmusk that the safest way to store your firearm is Unloaded and Locked.

This is critical to practicing responsible gun ownership. I suspect that if you spent a day with me in our trauma center, your views may change. https://t.co/yD7u3xO3ap