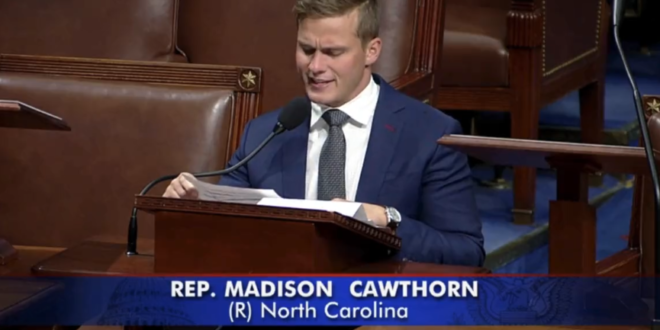 “Our young men are taught that weakness is strength, that delicacy is desirable, and that being a soft metrosexual is more valuable than training the mind, body, and soul.

“Social media has weakened us, siphoning our men of their will to fight. To rise in a noble manner, square their jaws, and charge once more into the breach of light to defend what they love.

“So on this precipice of disaster, I ask the young men of this nation a question. Will you sit behind a screen while the storied tales of you forefathers become myth?

“Or will you stand resolute against the dying light of America’s golden age? Will you reclaim your masculinity? Will you become a man to be feared, to be respected, to be looked up to?

“Or will you let this nation’s next generation be its final generation?” – Rep. Madison Cawthorn, making a rare appearance on the floor of the US House.

Outgoing Rep. Madison Cawthorn (R-NC) rants on the House floor about men being taught to be a “soft metrosexual”:

“Will you reclaim your masculinity? Will you become a man to be feared, to be respected … or will you let this nation’s next generation be its final generation?” pic.twitter.com/FLTkahfmh9