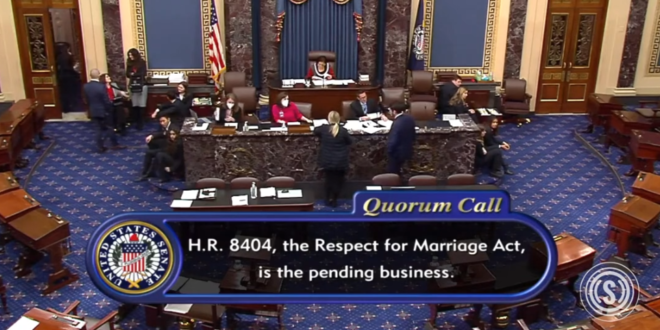 Lawmakers are moving forward with the vote Tuesday afternoon after securing essential Republican support during a procedural vote on Monday. With bipartisan support, the legislation is expected to clear the Senate Tuesday, then head back to the House where it is expected to be passed quickly and sent to the president’s desk to be signed into law.

Read the full article. Today’s vote will focus on a trio of “religious liberty” amendments pushed by Republicans.

NEWS: Sen Young comes off Senate floor saying there’s a deal on amendment votes RE: the Respect for Marriage Act:

But I am hopeful that they will act to protect millions of families, including ours, and appreciate all that has gone into preparing this important legislation to move forward.