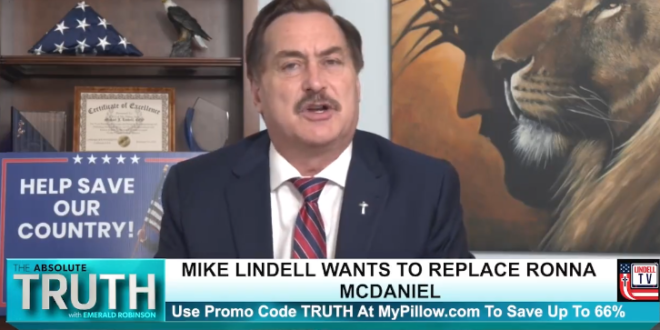 Lindell Launches Bid For RNC Chair: “This Is God’s Will”

“With all my due diligence and in prayer, I am 100% running for RNC chairman against Ronna McDaniel,” Lindell said. “It’s going to change real fast. We’re going to get our country right, really quick.” Lindell said he has spoken to RNC donors and state officials, and obtained their support.

Mike Lindell: “I am 100% running for the RNC Chairman against Ronna McDaniel.”

The Republican Party continues its descent into absurdity. pic.twitter.com/xh8Vofo6xX

Trump’s endorsed him. This should be entertaining.pic.twitter.com/jHDRO0Y3nB

Mike Lindell says not even Trump can talk him out of running for RNC Chair.

Lindell: “This is God’s will.” pic.twitter.com/facTEj3lNp