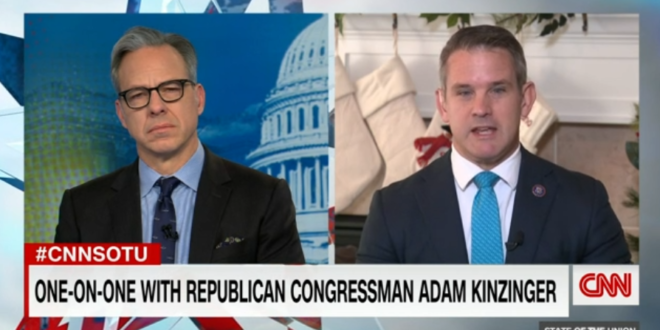 “I think he has cut so many deals with bad people to get to this position that I think he’s not going to be a leader at all. I think he will be completely hostage to kind of the extreme wings of the Republican Party.

“And I, frankly, don’t think he’s going to last very long. Maybe he will prove me wrong. But it’s sad to see a man that I think had so much potential just totally sell himself.

“I have done this business for a while. And I will tell you, they’re just the ‘hope yes, vote no’ caucus. They vote no on everything, or now they’re only going to vote for the most conservative stuff.” – Rep. Adam Kinzinger, today on CNN.

Kinzinger on CNN on Trump being reinstated to Twitter: “I don’t know if that decision should be made by some poll.” pic.twitter.com/1UNgqdm3X7

‘You have never sacrificed for a thing in your life’: Kinzinger unloads on Marjorie Taylor Greene over Ukraine | CNN Politics https://t.co/C6vBMjF8kP