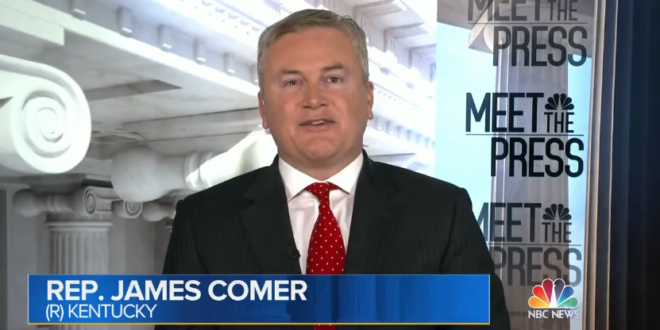 Rep. James Comer (R-Ky.) on Sunday said the House Oversight Committee will investigate about “40 or 50 different things” when Republicans take control of the House of Representatives next year.

Comer, who will likely chair the panel when Republicans assume the majority, told NBC’s “Meet the Press” moderator Chuck Todd that Republicans “have the capacity” for a slew of investigations.

“We’ll have 25 members on the committee, and we’re going to have a staff close to 70,” Comer said. “So we have the ability to investigate a lot of things.”

“I wouldn’t take a meeting with Kanye West either.” pic.twitter.com/hLxOtxUDaD

“We already have many gun laws on the books. If passing a bill would simply end gun violence, I think you would have overwhelming support in Congress for that.” pic.twitter.com/axgGF7bnQC

“At the end of the day, we need to give Kevin a chance. … Kevin McCarthy’s never had a chance to be speaker.” pic.twitter.com/Lau57m7M92