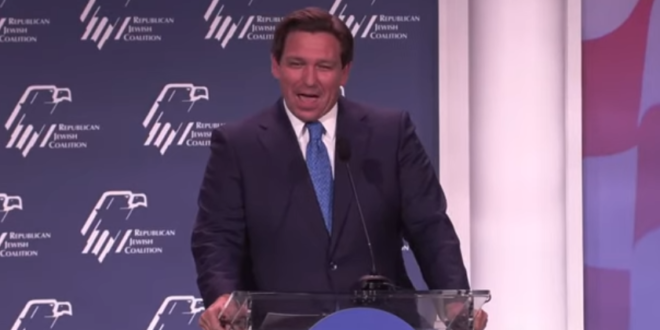 DeSantis Makes Pitch To Jewish Donors, Boasts About Baptizing His Children With Water From Sea Of Galilee

Governor Ron DeSantis portrayed his record in Florida as a blueprint for the US as some Republicans see him as a alternative to Donald Trump, telling a group of donors and activists “we’ve got a lot more to do, and I have only begun to fight.”

DeSantis didn’t mention the 2024 presidential race he’s widely expected to enter in a speech on Saturday night at the Republican Jewish Coalition meeting in Las Vegas, but he detailed the extent of his landslide re-election victory on Nov. 8 and his record that includes fighting coronavirus restrictions and so-called “woke” ideology.

“When you stand up for what’s right, when you show people you’re willing to fight for them, they will walk over broken glass barefoot to come vote for you,” DeSantis said, drawing a standing ovation.

Read the full article. At the same event last night, Chris Christie drew an ovation when he declared that Republicans “keep losing and losing and losing” because of Trump. Trump delivered his own message via video.

To a room full of Jews, DeSantis tells a story about bringing home — and then asking for Israeli folks to send — water from the sea of Galilee to baptize his kids.

And DeSantis says the Jewish settlements in the occupied West Bank, are just “disputed territory.”

DeSantis talks about holding public events “in Judea and Samaria,” making him the first American politician to do so.

“I don’t care what the State Department says. They are not occupied territory. It is disputed territory.”

DeSantis talks about bringing back water from the Sea of Galilee to baptize his children – then losing the bottle to a cleaner before his second was born. He made an appeal and “within 24 hours, there were people in Israel digging in the Sea of Galilee, sending us water.”