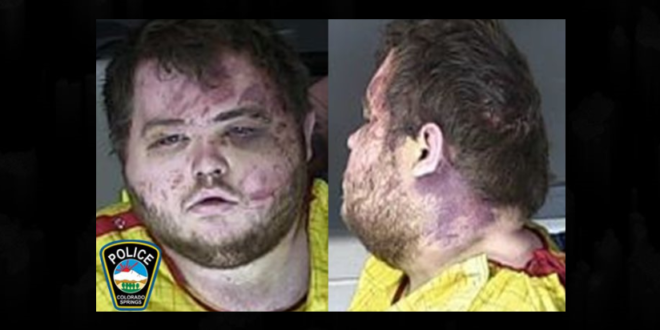 The official booking photo of Anderson Lee Aldrich was released by the Colorado Springs Police Department on Wednesday afternoon. The newly released photo shows Aldrich with multiple marks from the beating he took after being subdued by two patrons of the club.

Richard Fierro, 45, has been hailed as a hero after he says he reacted on instinct to help subdue the suspect.

Fierro said he smelled the acrid tang in the air, saw the muzzle flash of a firearm being discharged, and dove for cover, taking his closest buddy with him. When he saw his chance to tackle the shooter, he took it. Bystander Thomas James also helped subdue the shooter.

This is the booking photograph of the Shooting at Club Q suspect. pic.twitter.com/uA7lvU6S27

The Colorado shooter’s dad on finding out his son murdered people: “They started telling me about the incident, a shooting… And then I go on to find out it’s a gay bar. I got scared, ‘Shit, is he gay?’ And he’s not gay, so I said, phew… I am a conservative Republican.” (@CBS8) pic.twitter.com/7Zw4vpLtjE

The Colorado shooter’s dad: “I praised him for violent behavior really early. I told him it works… You’ll get immediate results.”

He then went on to praise the Colorado shooter’s grandpa, a MAGA Republican politician named Randy Voepel who supported the January 6 insurrection. pic.twitter.com/LAxevQwKDF

Imagine being relieved that your son is only a mass murderer and not a homosexual.