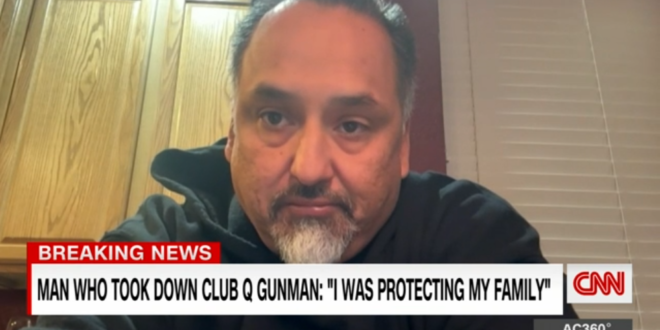 Former Army Maj. Richard Fierro never thought he would need to use the combat skills he learned in the military while on a night out with his family. Fierro and Thomas James were identified by police as two clubgoers who helped take down the suspected gunman.

“This whole thing was a lot, my daughter and wife should’ve never experienced combat in Colorado Springs. And everybody in that building experienced combat that night, not to their own accord, but because they were forced to,” Fierro tearfully told CNN.

“I don’t want to ever do this,” Fierro said of using his combat skills. “I was done doing this stuff, it was too much,” he said. “It lives in you. If you actually do this stuff, it’s in you … I’m not a GI Joe, I’m just a normal guy.”

Read the full article. Watch the full clip. The boyfriend of Fiero’s adult daughter was among those killed.