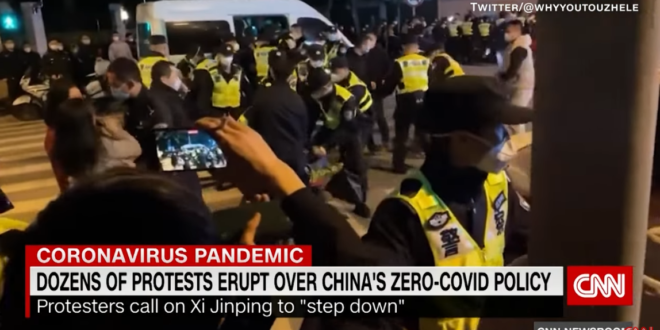 Protests spread to cities and college campuses around China on Saturday night, reflecting rising public anger at the country’s draconian Covid controls, with some in a crowd in Shanghai directing their fury at the Communist Party and its top leader, Xi Jinping.

The wider demonstrations followed an outpouring of online anger and a street protest that erupted Friday in Urumqi, the regional capital of Xinjiang in western China, where at least 10 people died and nine others were injured in an apartment fire on Thursday.

Many Chinese people say they suspect Covid restrictions prevented those victims from escaping their homes, a claim the government has rejected.

In Shanghai, protesters gathered at Middle Urumqi Road at midnight with flowers, candles and signs reading “Urumqi, November 24, those who died rest in peace,” according to a participant who would give only his family name, Zhao.

Zhao said one of his friends was beaten by police and two were pepper-sprayed. He said police stomped on his feet as he tried to stop them from taking his friend away. He lost his shoes and left barefoot.

Crowds of demonstrators in Shanghai shouted and held up blank sheets of papers early on Sunday evening, as protests flared in China against heavy COVID-19 curbs following a deadly fire in the country’s far west sparked widespread anger.

The wave of civil disobedience, which has included protests in cities including Beijing and Urumqi, where the fire occurred, is unprecedented in mainland China since Xi Jinping assumed power a decade ago.

As a large group of police looked on, the crowd held up blank sheets of paper as a protest symbol against censorship. Later, a large group chanted “Down with the Chinese Communist Party, down with Xi Jinping”, according to witnesses and videos, in a rare public protest against the country’s leadership.

Protests spread to cities and campuses in China on Saturday night amid rising public anger at the country’s strict Covid controls. In a rare act of political defiance, a crowd in Shanghai chanted calls for the removal of China’s leader, Xi Jinping. https://t.co/E9l1XU76xG