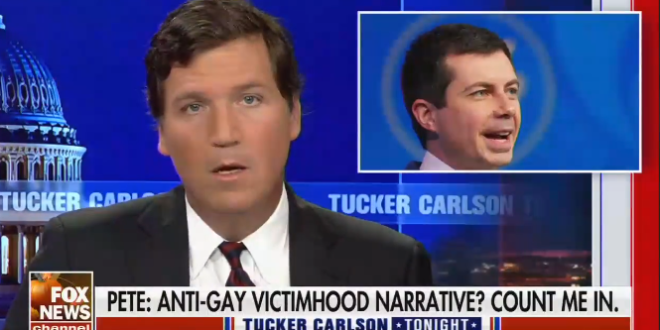 Carlson Attacks Buttigieg For “Lying” About Being Gay

Pete Buttigieg, of course, couldn’t pass up a moment like this. It’s not like Pete Buttigieg wants to talk about how things are going over at the Transportation Department, which he supposedly runs. Short answer: not well.

But whatever. Now he is happy to use his sexual orientation as a cudgel to bash you repeatedly in the face into submission.

Quote, here’s his latest, ‘If you’re a politician or media figure who sets up the LGBTQ community to be hated and feared, not because any of us who ever harmed you, but because you find it useful that don’t you dare act surprised when this kind of violence follows.’

Don’t you dare act surprised. Don’t you dare. All right, fair enough. We won’t dare. But honestly, we’re a little surprised to learn that the anti-trans shooter is himself trans. Were you surprised by that?

Buttigieg, now that you’re admitting you’re gay after lying about it, since we’re talking about identity. What do you have to say about that? Well, nothing. Weirdly, Pete Buttigieg hasn’t said anything, nor has he apologized for attacking other people on false pretenses.

Buttigieg, who came out publicly while mayor of South Bend, Indiana, has spoken often about the emotional toll of being closeted in the military during “Don’t Ask, Don’t Tell.” Tucker Carlson, like his bloated orange hero, never served.

“Until just a few years ago, Pete Buttigieg wouldn’t even admit he was gay. He hid that and then lied about it for reasons he has never been asked to explain. Why not?” pic.twitter.com/c2Wfh9h867