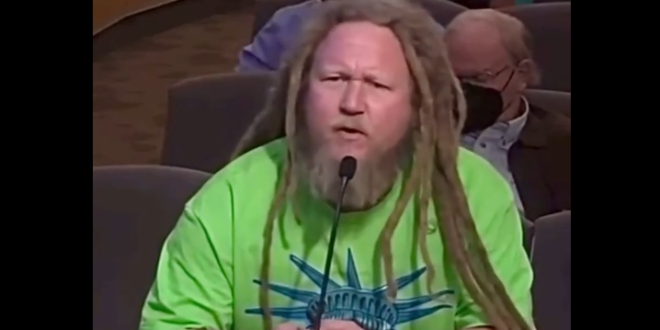 Kari Lake, the failed GOP nominee for governor of Arizona, retweeted Sunday a speech from Matt Baker before the Maricopa County Board of Supervisors, in which Baker alleged voter fraud in the midterm elections in the state.

As the clip of Baker went viral online, many were quick to point out his affiliation with InfoWars and his Friday appearance with Alex Jones, in which he claimed robots are trying to control humanity — parroting talking points from the so-called New World Order conspiracy theory.

Read the full article. As you can see below, Baker wore the same shirt when he raged before the San Diego board back in August.

The San Diego Board of Supervisors meeting tonight featured a litany of deranged anti-vaccers, including Matt Baker. He accused them of violating the Nuremberg Code, called them Nazis with Fauci as Fuhrer, and said “your children and your children’s children will be subjugated.” pic.twitter.com/F9Kx9RHP41

Previous Pompeo: The Most Dangerous Person In The World Is The Head Of American Federation Of Teachers Union
Next CHATTER AWAY: Overnight Open Thread