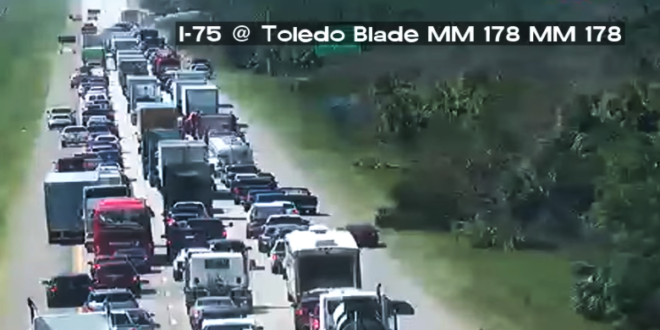 Because of rising water, a section of Interstate 75 between Venice and North Port has been closed in both directions. The closures affect I-75 and Florida State Road 93 in both directions, according to a news release from the Florida Department of Transportation (FDOT).

FDOT also says to expect major delays and for the detours to continue until the water recedes along the major west coast corridor. Unfortunately, as of Saturday, the flood waters will not be receding any time soon. The closures come more than 48 hours after Hurricane Ian made landfall in Southwest Florida near Cayo Costa in Lee County.

The Myakka River Watershed spans 594 square miles, covering parts of Manatee, Hardee, Sarasota, DeSoto and Charlotte counties. The river drains into Charlotte Harbor, which received the brunt of the storm and storm surge.

Major Traffic Alert: Both directions of I-75 are now closed from mile marker 179 (Toledo Blade Blvd) to mile marker 193 (Jacaranda Blvd) The Myakka River under I-75 has risen and impacted the interstate, no longer making it safely passable for motorists. https://t.co/M5ymHpo6cn pic.twitter.com/uS7jvVNO08

A portion of the I-75 is closed in Florida due to flooding. @KellyRWeather has the latest. #FLwx pic.twitter.com/sFCogqgkZz

(@NBC2)-TV: “I-75, the Myakka River under the interstate has risen and impacted the interstate, no longer making it safely passable for motorists” https://t.co/qSDldaDTgC pic.twitter.com/jLmMycfsDr