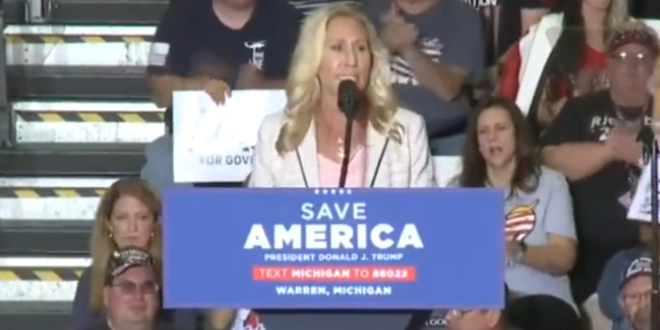 Greene, who has repeatedly spread bizarre conspiracy theories, went on to reference a local news story to support her baseless claim that Democrats are hunting down GOP voters. “An 18-year-old was run down by a Democrat driver who confessed to killing the teenager simply because he was a Republican,” said Greene.

However, North Dakota Highway Patrol Captain Bryan Niewind told Fox News that his department’s investigations have “uncovered no evidence to support the claim” that the murder had anything to do with politics or that the victim was a Republican.

Marjorie Taylor Greene: “I am not going to mince words with you all. Democrats want Republicans dead and they have already started the killings.”

This rhetoric is dangerous and unacceptable. pic.twitter.com/2UiKXsrlsJ

“Democrats want Republicans dead and they have already started the killings,” @RepMTG said today. Republicans are following the clinically insane. Getting GOP nuts to think Democrats are going to attack them is a guaranteed recipe for fomenting violence by the lunatic right-wing.