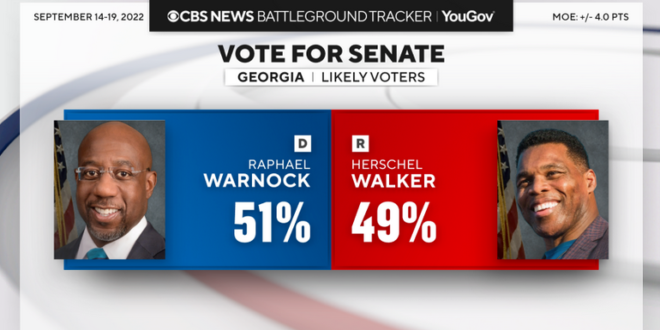 It’s the personal vs. the partisan in Georgia’s Senate race, where the candidates are close in support, but voters’ rationales for supporting each of them are quite different. Democratic Sen. Raphael Warnock has better favorable ratings and character measures, while GOP challenger Herschel Walker’s voters have eyes on Washington and a chance for a Republican Senate.

In all, the new CBS News Battleground Tracker poll in Georgia shows incumbent Warnock with a slight two-point edge over Walker.

Warnock is boosted by higher ratings on measures like how he handles himself personally, having the right experience and being a good role model. Fewer voters see Walker those ways — including some of his own backers — but his supporters do think of their vote as one against the Biden presidency, and one to help Republicans get Senate control.

Previous Putin Threatens To Use Nukes: “This Is Not A Bluff”
Next World Cup Captains Seek To Wear Rainbow Armbands