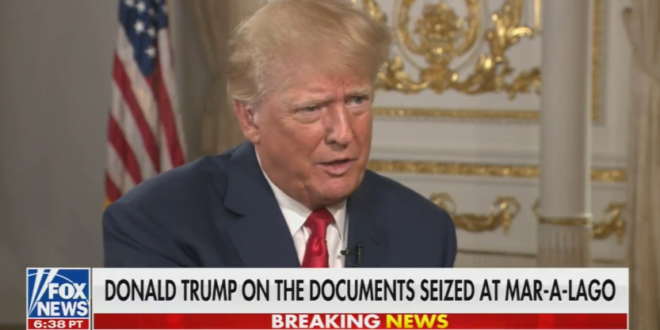 Trump: I Can Declassify Just By “Thinking About It”

Donald Trump just made one of the broadest claims of presidential power yet, telling Fox News host Sean Hannity he had the ability to declassify government documents with his mind.

“There doesn’t have to be a process, as I understand it,” he told Hannity. “You’re the president of the United States. You can declassify just by saying, ‘It’s declassified.’ Even by thinking about it.”

Trump also claimed he might not have been the real target of the search anyway, telling Hannity the FBI may have been looking for documents on his 2016 presidential rival, Hillary Clinton.

“There doesn’t have to be a process … I declassified everything” — Trump on how he declassified documents (this is false — there is a process Trump didn’t follow) pic.twitter.com/ehX8QqTnmB

I’m very very excited for tomorrow, when we will find out which members of Congress embrace the idea that Trump can telepathically declassify documents.

Wait—don’t you at least have to twitch your nose like Elizabeth Montgomery’s character in “Bewitched”? https://t.co/hMco5lK71p

Trump just claimed he could declassify things by saying “‘it’s declassified,’ even by thinking about it.”

I know he says he’s a big “thinker” and all, but that’s not how any of this works. Not by any stretch of the imagination.

Tonight on Fox “News” Trump actually said that, as president, he could declassify documents simply “by thinking about it.” #CarnacTheMagnificent pic.twitter.com/CoI5ebrMIz

Donald Trump released his tax returns just by thinking about it.