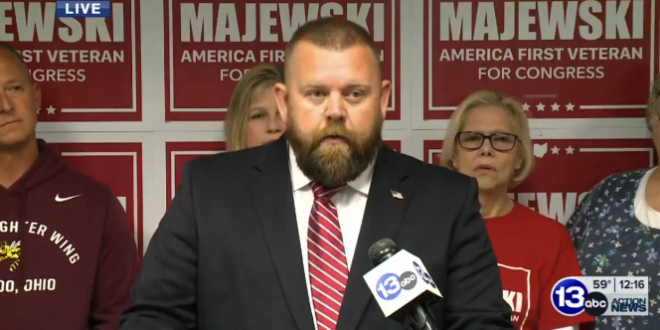 Republican J.R. Majewski insisted today that he would stay in the race for a competitive northwest Ohio congressional seat after The Associated Press reported earlier this week that he misrepresented key elements of his Air Force service.

The comments came amid growing fallout for Majewski, who repeatedly said he deployed to Afghanistan after the 9/11 attacks, but instead served a six-month stint loading and unloading planes while based in Qatar, according to records obtained by the AP through a public records request.

Meanwhile, advocates for veterans questioned why Majewski has declined to offer proof, or even describe forays he made into Afghanistan.

Read the full article. Majewski has said that his missions to Afghanistan are classified. Last week the GOP canceled all ads in support of his campaign.

Republican J.R. Majewski is insisting that he plans to stay in the race for a competitive northwest Ohio congressional seat after @AP reported earlier this week that he misrepresented key parts of his Air Force service. https://t.co/hi0crXgAOI

J.R. Majewski, who’s lied extensively about his military service, is best known for painting a 19,000-square-foot pro-Trump banner on his front lawn. (via @MaddowBlog) https://t.co/cnNCTaLYsT

I can confirm Majewski was in Afghanistan on a secret classified mission, I met him when I was there hiding from the supermodels who are always hitting on me https://t.co/3GOo9swZaU

If only Majewski had been endorsed by someone who could easily de-classify anything he wanted. https://t.co/0SmOTLAcce

J.R. Majewski blatantly lied about serving in combat in Afghanistan. This isn’t just stolen valor and an insult to those he’s trying to represent, but to those who actually served in Afghanistan, many giving their lives. He must drop out.