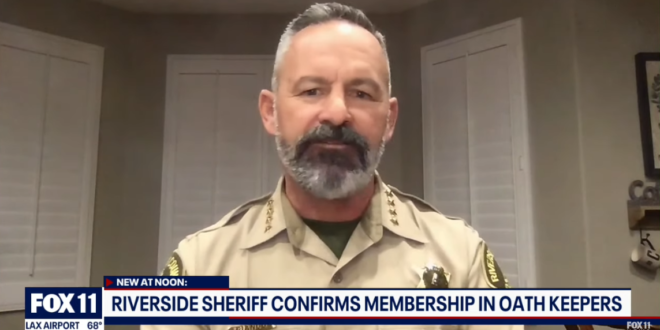 Slate: Inside The Push To Recruit Far-Right Sheriffs

Last November, the Claremont Institute hosted its inaugural class of “Sheriff Fellows.” Over the course of a week, eight sheriffs—all white men—chosen from the more than 3,000 in the country stayed at the Waterfront Beach Resort in Huntington Beach, California, attending a series of discussions, lectures, and fireside chats steeped in the far-right-wing think tank’s heady intellectualism and radical ideology.

What emerges in reviewing this information is a portrait of the far right’s deep investment in sheriffs. They seem to be a key target of the movement because the office is already vulnerable to extremism and because sheriffs can enable other extremist actors like vigilantes and militias to wreak havoc on society.

Claremont provides a historical and intellectual cover for selected sheriffs to continue a march into white Christian nationalism; for Claremont, the sheriffs are elected influencers who can push their message into the mainstream, far from the coterie of intellectual elites.

A look inside the secretive Claremont Institute program to indoctrinate and empower “Constitutional Sheriffs” to defy state and federal law. https://t.co/r0VjNu1dQT