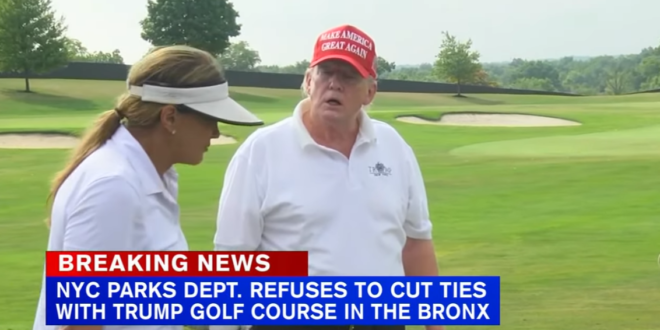 The New York City Parks Department has again rejected calls by members of the city council to terminate the Trump Organization’s license to operate a city-owned golf course in the Bronx. Council members on Thursday called for the “immediate termination” of the Trump Organization’s license to operate the golf course at Ferry Point Park, a month before it’s scheduled to host a women’s tournament underwritten by Saudi Arabia.

“As we’ve told Chair Krishnan and his colleagues in the City Council, ending the contract we inherited would require the city to pay up to tens of millions of dollars to the Trump Organization, an outcome no one wants,” a department spokesperson said in a statement. “We agree with the chairman on the desired outcome to cancel both this tournament and the overarching license agreement, and hope in the future he seeks a productive partnership on the issue.”

In the clip below, Council members and 9/11 families repeat their demand to end the contract. The course will hold a Saudi-sponsored tournament next month.

New York City officials have again rejected calls by members of the city council to end the Trump Organization’s license to operate a city-owned golf course in the Bronx. https://t.co/4BkWOksTRh

#9/11Justice members @DennisMcGinley8 and Tim Frolich are at City Hall calling for the city to void a contract with a Trump-operated golf course in the Bronx to host a Saudi-backed tournament. Frolich calls it a “throat punch” because of Saudi links to 9/11 hijackers. @wcbs880 pic.twitter.com/FwebNN5AvT