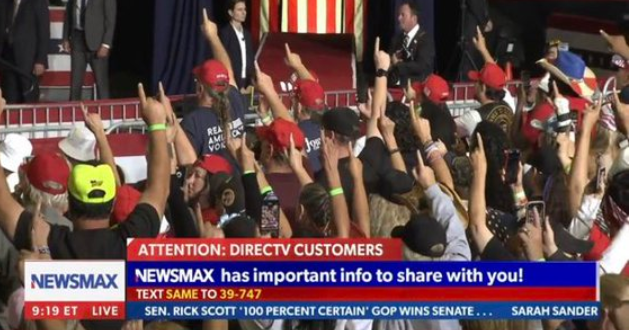 Security personnel at Donald Trump’s rally on Friday night in Wilmington, North Carolina, attempted to get MAGA-loving supporters to lower their raised arms and single finger, which signifies their allegiance to the far-right conspiracy theory QAnon.

One longtime Trump adviser told The Daily Beast on Friday: “Q stuff is so bizarre,” while adding that Trump sees it as a “controversial” media topic and as an opportunity to “gin up outrage.”

THIS.
Confirmed w people at Trump rally who held 1 finger up that they meant it as a symbol of QAnon’s “Where We Go One We Go All” and further…

Security staff here fanned out and told people to take down their fingers. That is a reason why – maybe main reason – we saw fewer 1/

The man in this photo held up 1 finger and told me he meant it as a WWG1WGA sign – and then the security guard in the next photo told him to take it down.

He was furious “thats my Constitutional right!” the man in the crowd told me after I saw that interaction happen. pic.twitter.com/nAb6norcjT

Addition: Trump rally staff told me the folks in the olive shirts and black pants were not security, but “guest management”.

In my defense, it was an easy assumption – shirts said “security”. But I was told it was as part the name of their company “Colorado Security Agency”.

And this happened again – though less widespread. pic.twitter.com/GxHEv1NRZ5

Separately, can confirm QAnon force Michael Brian Protzman is here at the Trump rally with a group of people in the center aisle, a few rows back from stage/Trump’s podium.

I spoke with him briefly. Have many questions (as I told him).

Now the Trump rally music is Elvis Presley singing “Dixie” and “the Battle Hymn of the Republic” both of which are very specific references to many southerners. (And we are in NC, reminder.)