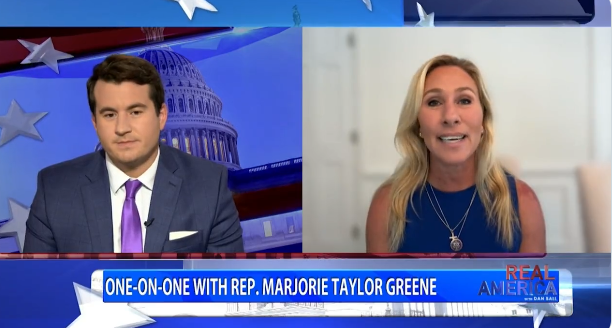 “We will see this continue leading into November because they believe the way to drive people to the polls is by scaring them.

“They’re lying to women all over America saying that they can’t have an abortion anymore, which that’s a lie. There’s plenty of places that women could easily get an abortion.

“They’re lying too to gay Americans saying that Republicans are trying to take away gay marriage when that’s not something. I haven’t even seen a bill that says anything like that.” – Marjorie Taylor Greene, speaking yesterday to far-right troll Alex Stein.

Stein recently joined a mob of white nationalists in an attack on a gay bar hosting a drag event and last appeared on JMG for screaming “baby killers” at a group of young abortion rights protesters.

Right wing media having a normal one pic.twitter.com/mgeFVAlMPV

Marjorie Taylor Greene claims it’s a “lie” to say that Republicans are trying to take away abortion and gay marriage. pic.twitter.com/26uOazLZSf