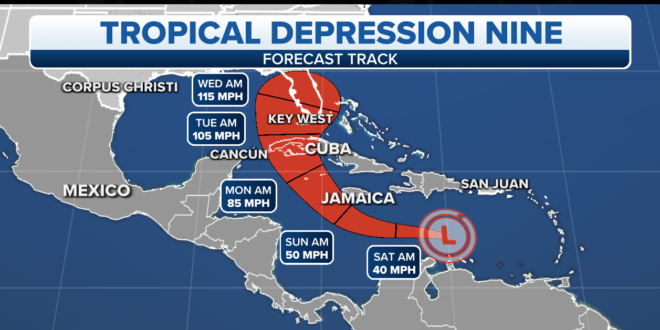 Tropical Depression Nine formed in the Caribbean on Friday with a path that could bring it to Florida next week as a major Category 3 hurricane that could become either Hurricane Hermine or Hurricane Ian depending on how fast it intensifies compared to another new tropical depression in the Atlantic.

In its 11 a.m. update, the National Hurricane Center said TD9 was located about 515 miles east-southeast of Kingston, Jamaica and 1,015 miles southeast of Havana, Cuba with 35 mph sustained winds moving west-northwest at 14 mph.

The cone of uncertainty now encompasses nearly all of Central Florida with the consensus landfall somewhere between Tampa and Naples with a path that could bring it up through the middle of the state.

The 11 AM ET Friday forecast from @NWSNHC for Tropical Depression Nine #TD9 is largely unchanged. NHC now explicitly forecasting a major (Category 3) hurricane threat next week. Wide bookends on this one, so Florida and the eastern Gulf need to monitor closely. pic.twitter.com/xls8YPUhkM

Here are the 11 AM EDT Sep 23 Key Messages for Tropical Depression Nine. Strengthening is forecast in the coming days, and residents in Cuba and Florida should ensure they have their hurricane plan in place.
For the latest updates: https://t.co/tW4KeGdBFb pic.twitter.com/ofzDMSNpA5

Latest NHC update for Tropical Depression Nine has the possible, initial impacts to the central-south parts of the Florida Gulf Coast as a Cat 3. This system is constantly evolving & this path will adjust daily. For now, stay plugged in & prep so you can calmly execute your plan. pic.twitter.com/0HvFGBva08