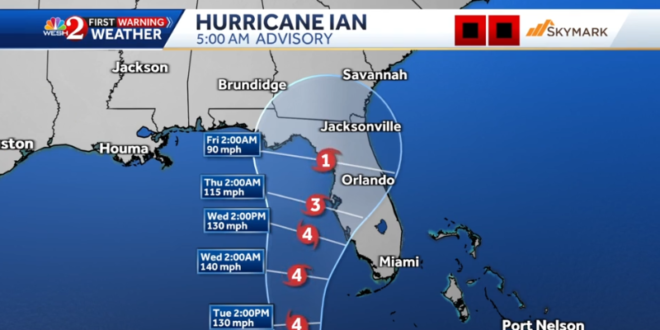 Hurricane Ian formed Monday morning as its path continued to shift back more to the east with much of Central Florida within the cone of uncertainty and the first hurricane watches issued on the state’s Gulf Coast. The latest track forecasts Ian to make landfall north of Tampa Bay early Friday as a Category 1 hurricane with maximum-sustained winds of 90 mph, but be parked just miles off Tampa as a Category 3 hurricane on Thursday afternoon.

“It should again be stressed that there is still significant uncertainty in the track of Ian, especially in the 3-5 day time frame, and users should not focus on the details of the track forecast at longer time ranges,” said NHC forecasters in the storm discussion noting some models have it making landfall farther south along the Florida coast with others putting it north in the Panhandle.

Its exact path still uncertain, Hurricane Ian strengthened overnight as it churned in the Caribbean, prompting urgent preparations in Florida, where the storm could deliver impacts, including tornadoes, starting Tuesday before possibly arriving as a major hurricane with powerful winds and dangerous storm surge.

Even as Ian grows stronger – with sustained winds now at 75 mph with higher gusts – there remains “higher than usual” uncertainty over its track and intensity, according to the National Hurricane Center.

Still, Floridians are being asked to prepare as they face the risk of dangerous storm surge, strong winds and heavy rainfall along the west coast and the Florida Panhandle, the hurricane center said. Heavy rain, hurricane-force winds, and storm surge are expected across the Keys and the West Coast of Florida this week.

BREAKING: Ian strengthens into a hurricane in the Caribbean, is forecast to become a major storm and head toward Cuba and Florida. https://t.co/MDqRJSiZF5

Previous CHATTER AWAY: Overnight Open Thread
Next British Pound Slides To Record Low Against US Dollar