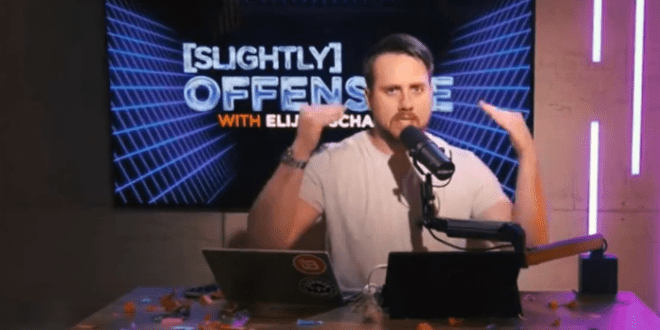 Elijah Schaffer and his “Slightly Offensive” podcast had an audience of 460,000 on YouTube to which he spewed more than slightly offensive bigotries about people of color, women, and the LGBTQ community. On Monday night, the commentator finally got canned from The Blaze, which hosted his show.

The Blaze issued a statement Monday evening on Twitter announcing his termination: “Following an investigation regarding a recent personnel matter, Elijah Schaffer’s employment with Blaze Media has been terminated for violating company policies and standards.”

The Blaze had ample opportunities to fire Schaffer. Taking a stroll through the garbage heap that was his show, we wonder why comments that he made on “Slightly Offensive” didn’t reward him with a termination notice sooner.

Schaffer, who has hosted self-avowed white nationalists on his show, has called for Native Americans to “get the fuck out of America.”

He appeared on JMG in April 2022 when he and his co-host joked about murdering trans children in a segment that was later edited out of YouTube versions of his show.

He also appeared here in July 2022 when he declared that countries with female leaders have been “cursed” because “their men are weak.”

The Blaze finally fired Elijah Schaffer yesterday. Taking a stroll through the garbage heap that was his show, we wonder why comments that he made on “Slightly Offensive” didn’t reward him with a termination notice sooner. https://t.co/jPYLgtRxfb

Elijah Schaffer, who has repeatedly used his perch at Glenn Beck’s TheBlaze network to promote white nationalists, has a message for Native Americans: “Get the fuck out of America!” pic.twitter.com/dGnUDP0iDc

“This is the most racist thing I’ll say all podcast” seems like an odd way to begin making your argument, but then again, we’re not @theblaze host Elijah Schaffer: “Multiculturalism is gay. It sucks. It’s stupid. It doesn’t work. It never has worked.” pic.twitter.com/oxjGsOo8l9