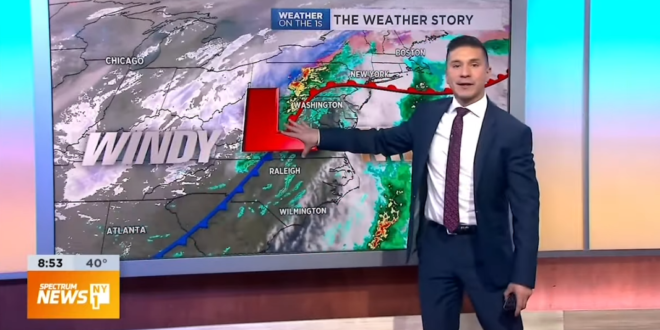 A TV weatherman in New York City was fired from his job after nude screenshots from an online video chat were sent by an anonymous user to his bosses at work as well as his own mother, court documents obtained by The Daily Beast show.

Erick Adame, a two-time Emmy nominee who served as a NY1 meteorologist for about four years until he recently disappeared from the air, is now petitioning a Manhattan judge to force the owners of the internet forum—named in court papers as Unit 4 Media, Ltd.—to identify the people who leaked the NSFW material and deep-sixed his career.

The website itself is not specified in Adame’s filing. A site called LPSG.com, however, advises users, “When you buy an LPSG membership it will appear on your bank statement as Unit 4 Media.”

Two-time Emmy nominee Erick Adame took to Instagram Monday to address his recent termination … saying he wants to share his truth, “rather than let others control the narrative of my life.”

He says he secretly appeared on an adult webcam website while still being employed with Spectrum News NY1 … stating he acted out his “compulsive behaviors, while at home, by performing on camera for other men.”

Erick claims the interactions were “100% consensual” … noting he didn’t make any money for the things he did on camera. He makes it clear, though — “I don’t apologize for being openly gay or for being sex-positive.”

Former NY1 weatherman Erick Adame is asking to be judged on his TV career and “not the couple of minutes of salacious video that is probably going to soon define me in our ‘click-bait’ culture.” https://t.co/BCI3vk7pDP w/ @JustinRohrlich

Wait am I really reading this correctly?

In the Year of our Lord 2022, @NY1/@NY1weather fired Erick Adame for having virtual sex, even though NYC government literally advised people to have virtual sex during the pandemic?

Okay, who is the revenge-porn jerk who sent screenshots of Erick Adame not only to his bosses, to his mother?? https://t.co/sjbb9DIpXG