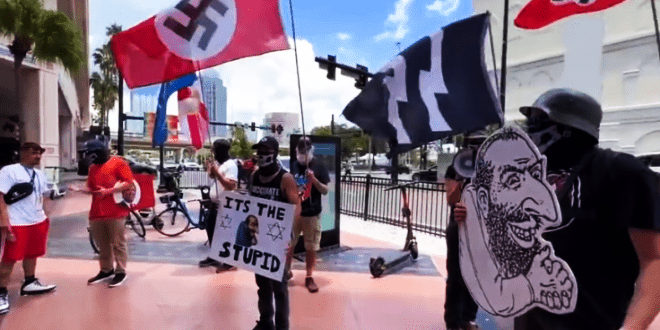 New from the Anti-Defamation League:

The past two years have seen a significant increase in extremist related incidents both nationwide and in the state of Florida. These incidents have been driven, in part, by widespread disinformation and conspiracy theories which have animated extremists and fueled antisemitism.

The result: unrest and violence, from the January 6 insurrection to white supremacist activity to a spike in hate crimes.

In Florida, new white supremacist groups have formed, including White Lives Matter, Sunshine State Nationalists, NatSoc Florida and Florida Nationalists, while existing neo-Nazi and accelerationist groups have broadened their audience both online and on the ground activities.

Other extremist groups such as Oath Keepers and the Proud Boys have shifted their strategies to focus on the local level, disrupting school board meetings and even running for political office.

From January 2020 to August 2022, ADL Center on Extremism (COE) recorded over 400 instances of white supremacist propaganda distribution in Florida.

Ninety-five of these incidents included antisemitic language or symbols, targeted Jewish institutions, or both. Propaganda allows extremists to disseminate hateful messages and gain attention with little risk of public exposure.

Ya don’t say. I’m SHOCKED and can’t IMAGINE why.

I wonder if it has anything to do with Ron DeSantis refusing to condemn the Nazis that carry his banner around and graffiti swastikas everywhere. https://t.co/ugdgJuD4MV