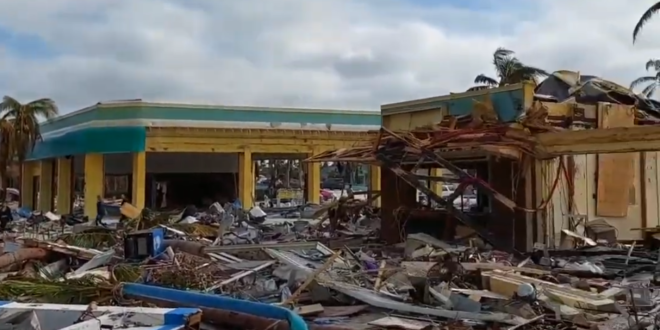 Fort Myers Beach, Florida, has been decimated by Hurricane Ian. Video shared by Bobby Pratt from the town on Estero Island in Lee County shows debris littered everywhere and buildings reduced to piles of rubble. Boats are slammed on shore, and a huge chunk of a pier is missing.

Governor Ron DeSantis said Thursday that the electric grid for Lee and Charlotte counties will likely need to be rebuilt, and sheriffs in southwest Florida said 911 centers were inundated by thousands of stranded callers, some with life-threatening emergencies.

A chunk of the Sanibel Causeway fell into the sea, cutting off access to the barrier island where 6,300 people normally live. The bridge that connects Pine Island to the Florida’s mainland is also impassable, DeSantis said.

Sanibel Causeway before and after. #Ian pic.twitter.com/9czBIqgn5X

Hurricane Ian update: This is the Sanibel Causeway—the one route on and off the island. A huge chunk of the bridge collapsed, making it impassable. Let’s take a walk and I’ll explain. This is part 1. The rest will be in the next tweet. #HurricaneIan #sanibel #florida @winknews pic.twitter.com/gRqzimhB9m

The images coming out of Sanibel Island are just heartbreaking. I’ve stayed there many times over the years & it’s one of the most magical places I’ve ever been to. My heart goes out to all impacted. #SanibelCauseway #Sanibel #HurricaneIan pic.twitter.com/7fjNd08EPT

Florida Governor Ron DeSantis described the hurricane as a “500-year flood event” and said that major infrastructure had been badly damaged including the Sanibel Causeway in southwest Florida and the bridge to Pine Island, near Fort Myers.https://t.co/C1E75R4OpG