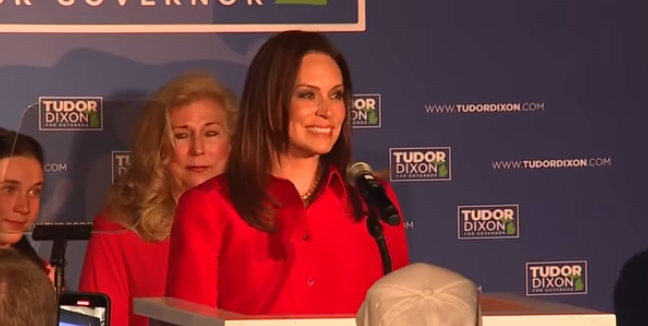 On Friday morning, the Republican appeared at a pro-Dixon superPAC event in Troy with former Trump adviser Kellyanne Conway and criticized Whitmer’s business record as governor. Standing in front of a sign that said, “Forging A Family Friendly Michigan,” Dixon then unexpectedly brought up the 2020 militia-tied plot against Whitmer — in which multiple people have been convicted — as an apparent punchline.

“The sad thing is that Gretchen will tie your hands, put a gun to your head and ask if you’re ready to talk,” said Dixon, a Muskegon County former right-wing commentator. “For someone so worried about being kidnapped, Gretchen Whitmer sure is good at taking business hostage and holding it for ransom.”

Dixon is backed by Trump and Betsy DeVos.

Four men have been convicted in the 2020 domestic terrorism plot that sought to kidnap Whitmer from her summer residence. Testimony during the trial indicated some of the defendants planned to put Whitmer on “trial” and then execute her. https://t.co/vCHLfNxpax

I remain stunned that this line was thought of, written, vetted, uploaded to a teleprompter and read aloud. https://t.co/NUrvzo2P7a