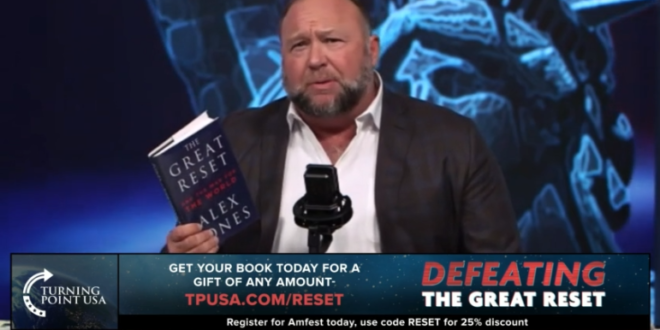 CHARLIE KIRK (TURNING POINT USA FOUNDER): I was told by everybody — it’s not the President Trump — but it is going to make you guys, wait till you see this, alright? In fact, this man is more hated by the media than Donald Trump, and that says something. OK? Which is, so, if you’re going to talk about the great reset, then you have to have someone who’s the most banned man in America, Alex Jones joins us.

ALEX JONES: I’m extremely honored to literally be here with the leader of the pack Charlie Kirk and the great Turning Point USA. I mean your buzz has been giant for six years and I’m telling you, everywhere, there’s victory. Everywhere people are awakening. Everywhere young people are being energized, and others, it’s Charlie Kirk and Turning Point USA, what you’re doing. So I’m very honored to be here and I salute you in the fight for western civilization and the future of our world and the battle to defeat the great reset.

At this writing, the hardcover version of Jones’ book is ranked at #15 on Amazon’s bestsellers list after peaking near the top last week. As you can see in the screenshot above, the book is free with a donation of “any amount” to Kirk’s outfit.