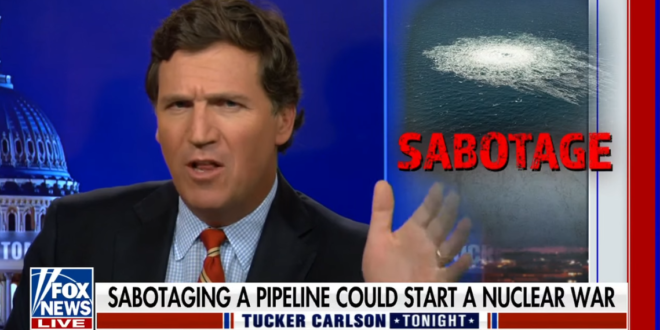 Tucker Carlson floated the possibility President Joe Biden is responsible for the suspected acts of sabotage on the Nord Stream pipeline. European officials said they believe the two explosions along the pipeline that transports Russian natural gas to European countries were intentional acts. During his monologue on Tuesday night, Carlson dismissed the idea that Russian President Vladimir Putin was behind the blasts. A more likely culprit, he said, is Biden.

“If Russia invades – that means tanks or troops crossing the border of Ukraine again – then there will be no longer a Nord Stream 2,” Biden said at the time. “We will bring an end to it.” “Notice how he phrased that,” Carlson said. “He didn’t say, ‘I will pause the delivery of gas from Russia to Germany.’ He said there won’t be a Nord Stream 2. We’ll take it out. We’ll put an end to it. We’ll blow it up.”

Carlson claimed that Biden said the U.S. would “blow it up” while speaking about Nord Stream 2 earlier this year. https://t.co/j7E1iryzxN

Tucker Carlson blames Pres. Biden for the leaks on the Nord Stream pipeline.

He claims Biden said he would “blow it up.” The President said no such thing.

Carlson even shows the footage yet looks right into the camera and claims Biden said something he didn’t say. pic.twitter.com/2W2ODj2NhP

After suggesting the US blew up the pipelines, Tucker starts listing possible options for the Russian retaliation pic.twitter.com/XvmHolSSg4