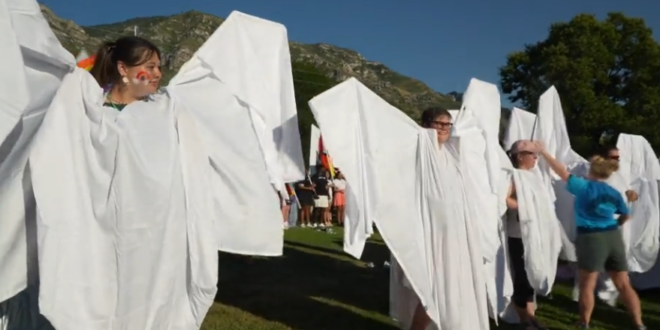 The angels stood quietly while protesters yelled “pedophile” and “groomer” and pushed signs quoting the Book of Mormon toward their faces. “You’re going against God,” one man spat. Another told them to “stop protecting the homos” at Brigham Young University.

The dozen people dressed in white didn’t flinch. Hand in hand, they formed a shield between the 100 people rallying in front of them and the LGBTQ students, alumni and friends from BYU who gathered off campus to find and show support for each other Saturday night.

The angel’s wings, made of white sheets draped over PVC pipe that extended 3 feet above their shoulders, blocked most of the posters at the “Back to School Pride Night” at Kiwanis Park in Provo.

Previous Russia Bans One Of Its Last Independent News Outlets
Next BOOK: Trump Once Tried To Pay Lawyer With A Horse