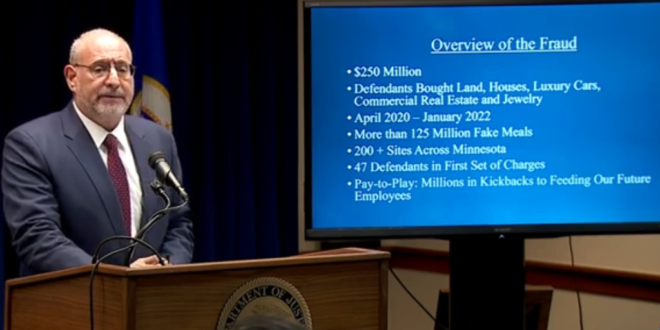 The director of the Feeding Our Future nonprofit and 46 other people have been charged in what federal prosecutors say was a “massive scheme” to defraud the government of more than $250 million meant to feed needy children during the COVID-19 pandemic. In a news conference in Minneapolis on Tuesday, U.S. Attorney Andrew Luger described it as the largest pandemic fraud in the country, and the charges amount to one of the largest federal fraud cases ever brought in Minnesota.

Six indictments were unsealed Tuesday that describe alleged crimes including wire fraud conspiracy, money laundering and bribery. Three others connected to the scheme, charged via felony information, are expected to plead guilty, Luger said. Aimee Bock, executive director of Feeding Our Future, was among those indicted. The separate indictments allege schemes of up to $40 million each perpetrated by groups sponsored by Feeding Our Future that falsely claimed to feed millions of children throughout the pandemic.

As part of the charged scheme, Feeding Our Future employees recruited individuals and entities to open Federal Child Nutrition Program sites throughout the state of Minnesota.

These sites, created and operated by the defendants and others, fraudulently claimed to be serving meals to thousands of children a day within just days or weeks of being formed.

To carry out the scheme, the defendants also created and submitted false documentation. They submitted fraudulent meal count sheets purporting to document the number of children and meals served at each site.

These rosters were fabricated and created using fake names. For example, one roster was created using names from a website called “www.listofrandomnames.com.”

Because the program only reimbursed for meals served to children, other defendants used an Excel formula to insert a random age between seven and 17 into the age column of the rosters.

In total, Feeding Our Future opened more than 250 sites throughout the state of Minnesota and fraudulently obtained and disbursed more than $240 million in Federal Child Nutrition Program funds.

The defendants used the proceeds of their fraudulent scheme to purchase luxury vehicles, residential and commercial real estate in Minnesota as well as property in Ohio and Kentucky, real estate in Kenya and Turkey, and to fund international travel.

A week after the FBI raid, the leader of Feeding Our Future, Aimee Bock, sat down with us in her first news interview, defending Feeding Our Future and denying the allegations. https://t.co/pqwMesllnV with @JeffMeitrodt. Photo by @ShariStrib pic.twitter.com/0d3JXCBX4N